In this edition of the Turtle Book Club we specialise our book recommendations on everything that focuses on conservation. Since six out of seven sea turtle species are vulnerable, endangered or critically endangered of becoming extinct according to the IUCN, conservation is a very large part of sea turtle science.

The books recommended here include stories from the roots of sea turtle conservation in the Atlantic, the Pacific, and also in the Indian Ocean! As turtles are only one part of the global ecosystem, we also encourage a closer look into the philosophical background around all of conservation.

From Soup to Superstar: The Story of Sea Turtle Conservation Along the Indian Coast

Compelling read focusing on so far under-represented science and effort in the Indian Ocean – great work about a region with famous mass-nesting events.

India is a big country known for its diverse wildlife on land. At the same time, the country has a very large coastline and many people are depending on the sea for income and food.

Traditionally, sea turtles are an important part of Indian folklore and mythology, as they are seen as Kurma, an incarnation of the god Vishnu. Turtles have been and still are an important livelihood for many people, which makes it all the more important that conservation efforts take them into account when they want to be successful.

In this book we can follow one of the leading sea turtle experts of the area and gain unique insight into the chronicles of turtle conservation in India – including ups, downs and specific challenges.

Turtle Planet – Compassion, Conservation, and the Fate of the Natural World

This book combines conservation and philosophy. Great think-piece for all nature lovers, not just ‘turtle nerds’.

In which the turtle is a poster child for our relationship with nature. The book has a broader scope than just sea turtles, but with a main focus on conservation.

Taoist monk Yun Rou present the reader with a philosophical approach to our relationship with nature. Rou is a turtle enthusiast himself, and thus finds it easy to relate to them. The author is not the only one with this take on turtles, which is why they are often flagship species for marine conservation. By protecting these iconic species and their habitat, many other species will benefit as well.

In the book, Rou establishes turtles and tortoises at large as a symbol for all global conservation, as he sees them as in balance with their environment and wants us as humanity to learn from their example.

So Excellent a Fishe: A Natural History of Sea Turtles

This is a ‘must read’ for all aspiring sea turtle scientists and conservationists!

This book written by the ‘father of sea turtle conservation’ in the Americas gives an introduction to the life history and behaviour of sea turtles.

Until it’s publication in 1967, many of the aspects discussed in the book were still unknown to the world. It was the result of roughly two decades of field work conducted by the researcher himself and laid the foundations for sea turtle research to come. How do sea turtle hatchlings find their way to the oceans? Which visual cues are used in sea finding behaviour? And were do female turtles go after nesting? These are just some of the questions asked and sought after during that stage of sea turtle research. While working with animals in the field, Carr also repeatedly encountered poachers removing turtle eggs from their nests or butchering larger specimen for meat…

Small volume with important general information on how to behave around sea turtles on the beach. Practical size makes it easy to have on site on the beach!

A brief overview of turtle biology and, more importantly, an extensive commentary on appropriate personal behaviour on turtle nesting beaches.

Some of the largest sea turtle nesting populations can be found on highly used beaches along the eastern coast of the United States of America. In his book, O’Keefe, starts with an overview on sea turtles in general, but quickly becomes very specific and detailing the history of human-turtle interactions in the US. From early turtle harvesting to distinct conservation efforts, every aspect is represented in the book, often with accompanying (historical) photographs.

Most importantly, O’Keefe explains how sea turtles nest and how humans should act around them to leave the animals undisturbed. (For a short on point overview, see our Code of Conduct!)

Great collection of more or less short chapters looking at different aspects of turtle conservation, brilliant reference source! We specifically recommend the chapters on fishing gear and its impact on sea turtles!

Focusing on the largest of the world’s oceans, this book collects conservation strategies, management tools and specific sea turtle projects from the Pacific Ocean.

In the book various experts are reporting on nesting beaches and fisheries-related conservation efforts in the Pacific Ocean. It includes the Bellagio Blueprint for Action on Pacific Sea Turtles, a very important think piece from different stakeholders summarizing and detailing possible conservation actions to help turtles.

In the area, one of the longest turtle migrations on the planet takes places – it crosses the entire Pacific Ocean! All the way from East Asia to Central America, leatherbacks are going from feeding to nesting grounds and back. Unfortunately, it is especially the leatherbacks which are in trouble in the region, with for example the Malaysian nesting population being virtually extinct. In this book many chapters are specifically dealing with the largest of the extant sea turtles. 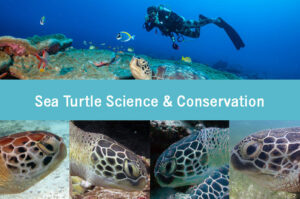 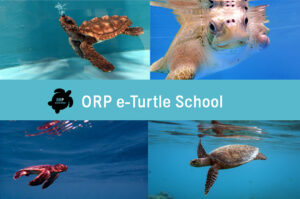 e-Turtle School – All About Sea Turtles

Everything you have ever wanted to know about sea turtles, from evolution to conservation. Suitable for all sea turtles lovers and those who want to learn more about these fascinating creatures.