The last week of August, we received two new patients. The first one is a critically endangered hawksbill turtle, Dhooni, and the second one, Chouchou, a juvenile Olive ridley turtle.

Dhooni was found floating near Amilla Fushi Resort in Baa Atoll. She had no external injuries, but was very sick and weak, showing signs of blood poisoning.

We took Dhooni for an x-ray and she appears to have pneumonia. She has a small chance of survival due to the severity of her condition, but we are doing everything we can to help her. We are treating her with antibiotics, fluid therapy and vitamin injections. We are also monitoring her breathing. Unfortunately, she has not yet responded to the medication. It is too early to know if she will recover and her prognosis is still very guarded.

She has not started eating yet, though she is trying, and is not moving much. However, she does try to bite when she is injected, so she showing small signs of life.

When Chouchou was found by the Constance Moofushi Dive Team, both her left flippers were trapped in the ghost net. The net itself was caught on corals in shallow water. Chouchou was badly injured: the net had nearly cut through one of her front flippers. In addition, she had a wound on one of her back flippers.

When she arrived at the rescue centre, Chouchou was too weak to undergo full anesthesia, which is required to amputate a flipper. Instead we performed a small surgery to remove her front flipper, leaving the bone in tact. After she had recovered for a few days, we performed a second surgery to remove the remaining stump in order to prevent an infection tracking up from her wound.

Chouchou failed to recover normally from the anesthesia after the second surgery. She became almost lifeless and lost her normal reflexes and ability to move. Six hours after the surgery was complete, our vets had to start breathing for her and monitor her heart using a Doppler machine. When her heart rate continued to decline, they gave her adrenaline.

For five hours our vets continued to help her breathe, as well as pinching and tickling her tail to stimulate cloacal reflex, before she finally showed small signs of movement. That was a huge relief! However, she was still not breathing on her own. Breathing assistance continued through the night until, finally, 24 hours after the surgery, she started breathing on her own.

By the evening she was moving around and holding her head up. The next morning we could finally put her back in the tank!

Last month we said goodbye to Burrito. Burrito has been at the Rescue Centre since January 2018 and is the largest turtle we have had so far, weighing in at 38kg. It is the first time we have released a turtle that lost two flippers on the same side.

Due to her large size and swimming ability, we felt she deserved a chance in the wild. She seemed very happy to be back in the ocean and swam off quicker than our cameraman could film her diving! She spent a little time getting her bearings at the surface before diving down.

Polina was released on Saturday 18th August 2018. She had been off antibiotics for more than a month, still using her flipper well, and showed no signs of problems. Her flipper was still a bit swollen, which is probably due to a constriction in blood supply. Lots of exercise in the ocean is the best thing for her now!

Pearl was released on 30th August 2018. She was already missing a back flipper when she came to us, and one of her front flippers was so severely damaged it required amputation. She had a wound to her other front flipper which we treated medically. She initially suffered from buoyancy syndrome which she overcame after 30 days.

She has stayed in the Rescue Centre whilst learning to swim again. We were not sure if Pearl would ever be suitable for release, but to our surprise she adapted well to swimming with only two flippers.
She was quick and agile in our tanks by the end of her stay. It took her 7 months to improve her swimming to the point where we felt she had a chance in the ocean. We assess all of our turtles on an individual basis. Those we feel have a chance in the wild are given that chance instead of a life in captivity.
Pearl was so pleased to be back in the big blue! She initially took some breaths at the surface, probably confused at this larger than usual tank, before realising she was free and swam off into the deep. Goodbye sweet Pearl! We miss her cheeky face. 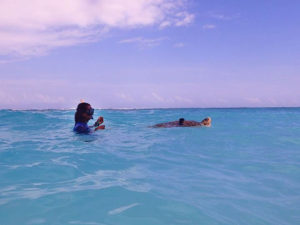 Penny, our longest resident patient, does not swim very well due to buoyancy syndrome. Yet, when we took her for a swim in the ocean, she nearly escaped past the edge of the reef! She is a very quick swimmer and after getting used to the belt, she suddenly took off. However, she still tires quickly due to her buoyancy condition, so we were able to catch up when she popped to the surface to rest.

Morgan, a sub-adult male Olive ridley turtle, had been at the Rescue Centre since June 2017. When he arrived, he had a severe case of shell rot, mostly present on his plastron, but also on his carapace. He had also lost both right flippers to ghost net entanglement, and had a deep neck laceration, covered in scabs.

Though he responded well to treatment and antibiotics, and was considered healthy, we could not release Morgan. His chance of survival in the wild with two missing flippers was slim.

Over the last three weeks, Morgan became very lethargic. He then suddenly stopped eating completely and he died unexpectedly over night a few days later. The post mortem revealed that he had both heart and liver disease.

Without the option to send away samples for lab testing, we are unfortunately unable to get a clear diagnosis. It is possible that he had a liver infection that seeded to his heart. The other possibility is that heart disease can cause congestion in the liver and then secondary liver disease occurs. We are all very shaken at the Rescue Centre with his passing. We did not expect him to pass away so suddenly as he appeared to be both happy and healthy.