Maldives Underwater Initiative – Uniting To Save The Ocean

Home » Blog » Maldives Underwater Initiative – Uniting To Save The Ocean 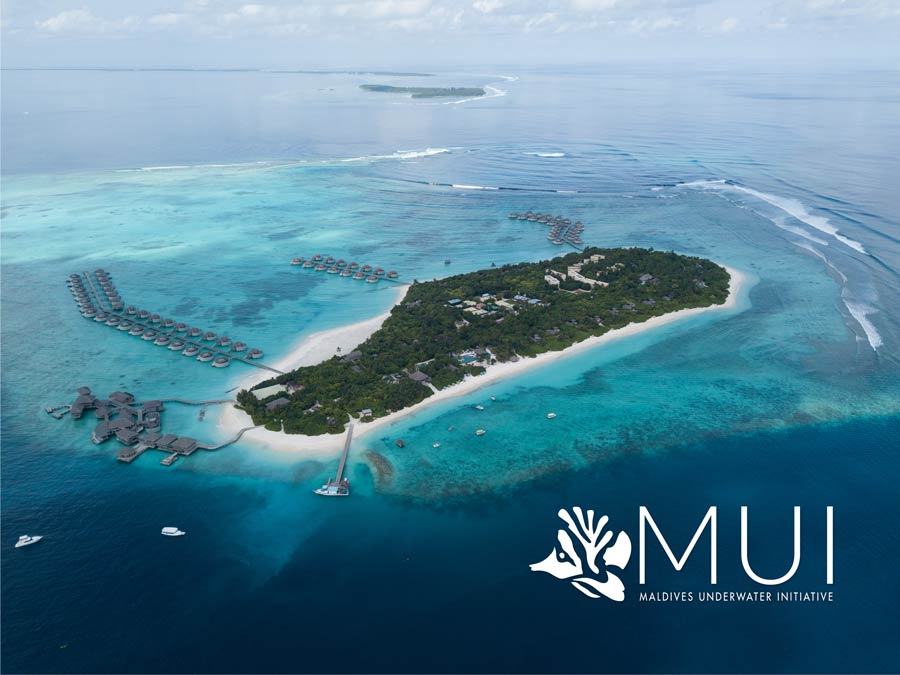 It all started with one. The resort employed just one marine biologist in 2012, back when Six Senses Laamu was only one year old. From there the marine team grew, adding interns over time and in 2014, the first partnership with an NGO: The Manta Trust, who began to study the year-round manta ray population in Laamu. In 2016, the Blue Marine Foundation (BLUE) joined the team onsite to study the plight of groupers threatened by the live fish trade.

This year Six Senses teamed up with the Olive Ridley Project to study the populations of endangered sea turtles in Laamu. We’re now a team of 10, one of the largest at any one resort in the Maldives, composed of Six Senses Laamu staff and onsite staff from our three partner NGOs.

If you found all of that difficult to follow: who of the 10 staff works for whom? What are their roles? Is it just research, or is there more to it? Well, we did too. So, we decided to simplify things. In July 2018, we formed the Maldives Underwater Initiative (or MUI, which means pearl in the local language, Dhivehi) to unite the resort and NGOs under one central banner and to consolidate our shared research, science communication and community education and outreach goals.

Our work towards these goals will have far-reaching impacts. But for now, let us focus on the significance of this initiative for the sea turtles of Laamu atoll, which is home to both hawksbill (Critically Endangered on the IUCN Red List of Threated Species) and green turtles (Endangered) and thought to contain the most significant green turtle nesting site in the country, L.Gaadhoo.

In the Maldives, turtles and their eggs were historically harvested for domestic consumption and trade, but consumption was limited thanks to religious beliefs. However, the religious ban on eating turtles was lifted in 1948 and in the 1970s, when tourism began to take off in the Maldives, demand for tortoise shell (from the shell of hawksbill turtles) as souvenirs rose and the harvesting of turtles increased once more.

In 1995, a nation-wide ban on the harvesting turtles was set in place following concerns that the rates of harvest were unsustainable. This was a positive step for sea turtle conservation however, up until 2006 there was no legislation concerning the harvest of turtle eggs, and only 14 significant turtle nesting islands were placed under protection at this time. It was only in 2016 that the ban on harvesting eggs was extended to the whole country.

From Exploitation to Conservation

Despite these attempts to curb the decline of turtle populations in the Maldives, residents in some atolls to this day still illegally poach turtles for their meat and dig their nests for eggs. Unfortunately, Laamu is one such atoll.

A significant goal for MUI is therefore to shift community attitudes from those of exploitation, to conservation of turtles and their habitats. One way we are working towards this is by visiting each of the 13 schools in the atoll and conducting a marine education program that combines theory lessons with practicals that show the students first-hand the importance of maintaining the balance of marine ecosystems. Following these snorkeling trips, we can see a shift in students’ attitudes, with students making comments like:

“When I saw the corals, I thought: these are the homes of the fishes and we need to protect them.”

This year was also the third year that Six Senses Laamu has held their ‘Turtles in Laamu–Safe and Protected’ festival. The aim of the festival is to raise awareness among students, teachers and parents about the importance of sea turtles to healthy marine ecosystems, the importance of protecting the coral reef and sea grass habitats they rely on and the threats they face. After the festival, one student said:

“Protecting turtles is absolutely necessary because plastic pollution is a great danger to nature and we must protect our marine life.”

We hope that with these changing attitudes and as we inspire more and more marine stewards in Laamu, we will get closer to our major goal of creating a network of locally managed marine protected areas, in consultation with the community. This effort is being spearheaded by BLUE but information on the health of Laamu’s turtle population will be vital in establishing the need for a protected area. So far, the efforts of MUI have identified nearly 400 green and hawksbill turtles at more than 30 dive and snorkel sites around the atoll. We’ve been studying the success of green turtle nests on our island (Olhuveli Island) in hopes of estimating rates of population growth. The 30 nests laid this year have kept the team busy with more than 1,000 hours of monitoring.

The Importance of Sea Grass

The Maldives Underwater Initiative is committed not only to researching these turtles but also protecting their habitats. Through our #protectmaldivesseagrass campaign we are engaging with other resorts and conservation organisations to change perceptions that seagrass (a supposed eyesore to tourists expecting pristine turquoise waters) and tourism don’t mix. One year on from pledging to protect our seagrass meadows, we’ve seen the benefits to guests who now regularly spot turtles, sharks and rays above and below the water and the benefits to our green turtles that come to feed in the shallow lagoon.

The Impact of Marine Pollution

We are also helping to protect Laamu’s turtles from marine plastic pollution. From waste management education in schools, to donating water filters and re-useable bottles to hospitals, households and schools, we are trying to stop plastic pollution at its source. One of the students we visited said:

“I saw a plastic bag on the corals and I thought I will take it to protect the marine life.”

And another wanted to send a message to the community in Laamu about plastic pollution:

“Litter makes the sea dirty. It kills the fishes and makes the environment unhealthy for people. Please don’t throw your garbage in the sea.”

Through all of these initiatives we at MUI, in partnership with the Olive Ridley Project, hope to see positive long-term changes that make Laamu atoll a safer place for turtles.