Find out what Charlotte got up to as a volunteer at the Marine Turtle Rescue Centre.

Despite arriving in the Maldives during the wet Monsoon season, which normally is a low season for turtles being trapped in ghost nets, Charlotte was a very busy volunteer. She assisted in the successful releases of three rehabilitated turtles and cared for two new inpatients. 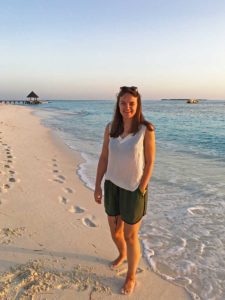 Volunteering with the Olive Ridley Project was an incredible opportunity to experience the everyday operations of the Marine Turtle Rescue Centre with the resident vet, Claire. One of the newest patients, the aptly named Stitch, arrived with a terribly broken flipper and an exposed esophagus from being trapped in a ghost net for weeks. Claire declared the flipper would need to be amputated as soon as possible as it was in too bad a state to be saved.

Amputation of a Flipper 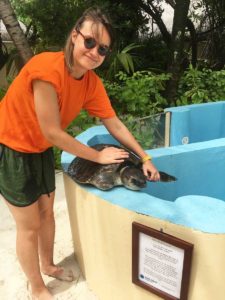 The following morning, my co-volunteer, Prakriti, and I assisted Claire in the operation room with the flipper amputation and the closing of Stitch’s open esophagus wound. Observing the procedure was fascinating. The experience really allowed me to gain an in-depth understanding of turtle anatomy – a knowledge I would never have gained by just feeding the turtles.

After the surgery, I kept a close eye on 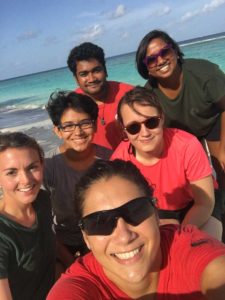 Stitch’s recovery from anaesthesia, making sure she was slowly waking up. As I watched her, I pondered on how these resilient creatures, who spend most of their time alone in the sea and have such an effective armored shell, become so vulnerable after being trapped in man-made nets. The experience of assisting with the surgery really emphasised the importance of the Olive Ridley Project and the conservation efforts they are making to help undo the negative effects of man-made dangers on these turtles.

More than a week after Stitch’s surgery, her amputated flipper is healing nicely. Although the wound to her esophagus is posing a bit more of a problem due to its location her neck, Stitch is as feisty as ever and eating well, which in my mind, says she is more than ready to continue her life out at sea!