The Olive Ridley Project is on a research mission to build evidence on the impact of ghost nets in the Indian Ocean, and particularly on Olive Ridley turtles, and to fill the gaps in scientific knowledge of sea turtles in the Maldives.

In order to overcome the many logistical challenges and financial restrictions of collecting large amounts of consistent data in remote areas in the Maldives, ORP has involved citizen scientists in data collection. Despite the remoteness, the Maldives is particularly suited for citizen science data collection programs, given the number of tourists that visit the country specifically to dive, snorkel, and view marine wildlife.

We train our citizen scientists in how to safely remove ghost gear and rescue any trapped marine animals. In addition, we teach them accurate data collection to ensure proper documentation of each ghost gear encounter. After a detailed analysis of the ghost nets, using the Ghost Net Data Input Protocol developed by ORP and IUCN, citizen scientists upload the data to our database via our website. Samples of ghost nets are also collected and used in further studies.

We collect sea turtle data using the Photo-ID method. PID is the process of recognizing individual animals of a species from unique markings on their body; individual turtles can be ID’d by comparing their unique facial scales. It is a scientifically proven technique of “tagging” animals. Photo-ID require little training – simply the ability to snorkel or dive and take a good quality photo without disturbing the animal. Find out more about Turtle Photo-ID here.

The ultimate goal of our research is to quantify the scale of the ghost gear issue and provide recommendations on how to manage and mitigate it. We also hope that our research results will prompt changes in fishing net and gear designs, as well as influence fishing legislation.

Where Do Ghost Nets Come From?

The Olive Ridley Project partnered with the University of Derby for our Ghost Gear Research to try to understand more about ghost nets, including where ghost nets found in the Indian Ocean come from.

We analyse the ghost nets to identify the types of nets used and possibly match them to specific regions. We hope to eventually identify what types of fisheries significantly contribute to ghost net numbers. Bottles and floats drifting with the ghost gear sometimes carry markings that give away their origin. dFad trackers can also lead us to the point of origin.

Another way we could possibly determine the origin of ghost nets is by knowing how long it has been drifting. ORP founder and CEO, Dr. Martin Stelfox, explored different techniques to age drifting ghost nets found in the Maldives as part of his PhD. Tested and developed further, one of these methods could help estimate the age of ghost nets. Using these estimates with ocean current modelling programs might give us a better understanding of drifting paths, turtle interaction, and possibly an origin of gear loss.

Other key questions we aim to answer are:

What We Have Learnt About Ghost Gear So Far

Ghost gear hot-spots have been identified all over the world. Unfortunately, the Maldivian archipelago in the Indian Ocean is a particularly extreme case.

It is difficult to determine the origin of a ghost net for several reasons. Ghost nets know no boundaries; they can drift for years following the currents of the ocean, travelling great distances from their original area of use. Furthermore, ocean gyres tangle multiple single nets into large conglomerates. In addition, the lack of information on the construction of nets being used in many fisheries complicates things further. 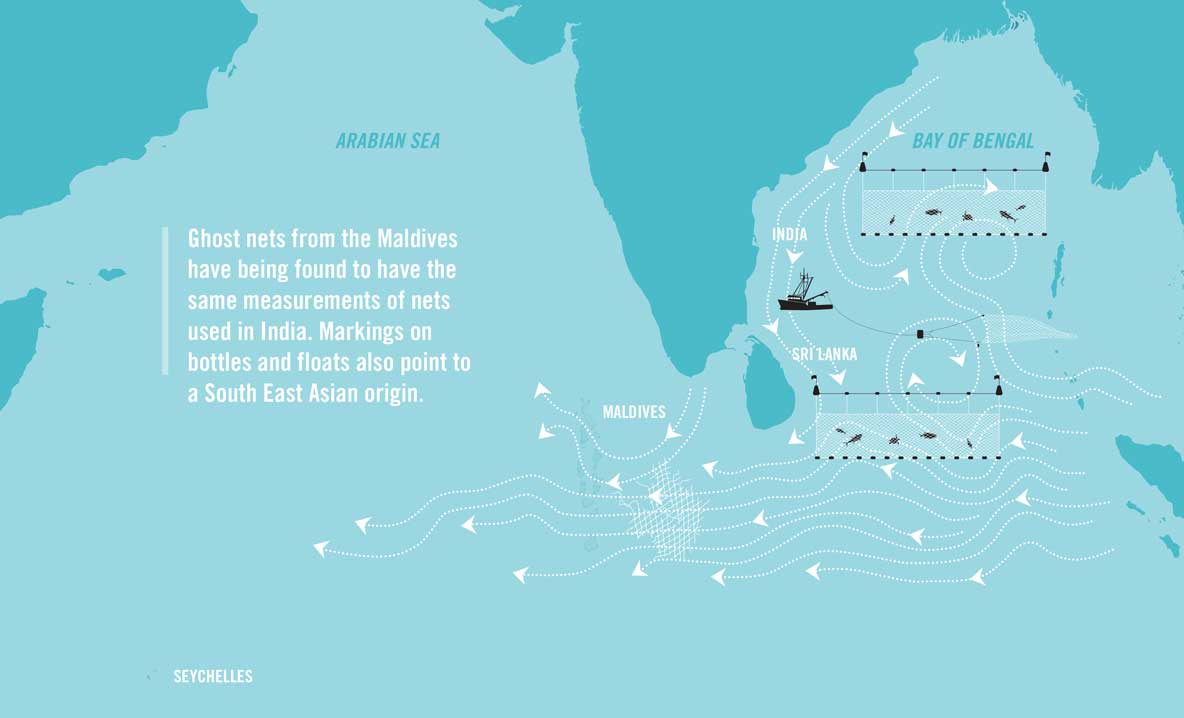 The data collected so far suggest that ghost nets may be coming to the Maldivian waters from Southeast Asian countries such as India, Sri Lanka, and Thailand during the Northeast Monsoon. 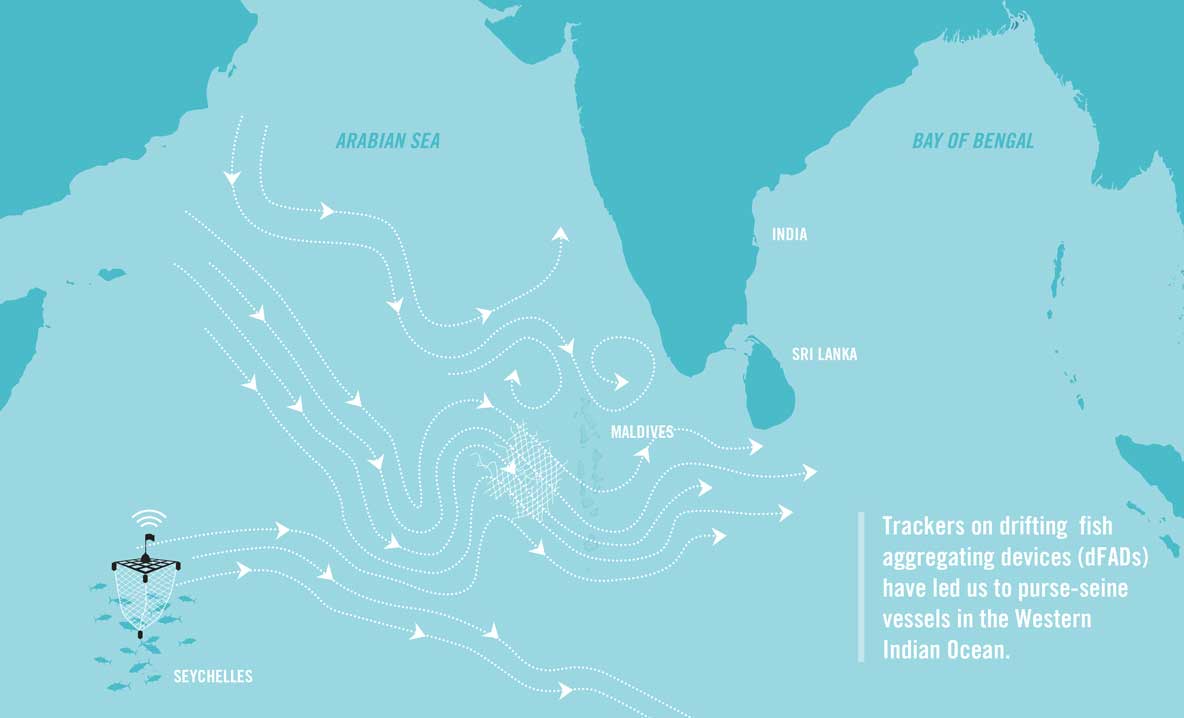 During the Southwest Monsoon, pieces of fish aggregating devices (FADs) indicate that the ghost nets are coming from the western Indian Ocean and the Arabian Sea.

To protect sea turtles and their habitats is, above all, the main aim of our sea turtle research. All seven species of marine turtles are threatened by extinction; five species reside in the Maldives.

In order to create effective turtle conservation and management strategies, we, first of all, need realistic estimates of population size and distribution. The starting point for ecological and conservation studies is often the ability to identify individuals, followed by statistical modelling.  A series of photos can, for example, reveal patterns of residency and movement between reefs, determine the population size and structure of a reef at a given time, and calculate inter-nesting periods.

The key questions we aim to answer through our research are:

The ORP ‘s Turtle ID database can be combined with the Maldivian government’s TurtleWatch database to interpret sea turtle population and movements in the Maldives as well as to develop and evaluate turtle conservation measures.

ORP is also working with a team of international scientists to develop a standardized protocol to compare turtle photos against a global-scale database. Furthermore, ORP has teamed up with other groups around the world to develop “The Internet of Turtles”, which will be a data-sharing platform for Photo-ID research.

What We Know About Sea Turtles In Maldives So Far

As of August 2020, the Photo-ID database has over 25,456 logged sightings – one of the biggest Turtle ID databases in the world.  More than 4,004 unique sea turtles have been ID’ed so far. Our citizen scientists add another 400-500 sightings every month. Visit the Maldives Sea Turtle Gallery so meet some of the identified sea turtles.

New discoveries have emerged from this citizen-science collected data:

The community of citizen scientists, volunteers, environmentalists and fellow Marine Biologists around the Indian Ocean are invaluable to the Olive Ridley Project. Their contributions have so far been phenomenal!

You can become a citizen scientist too!

Sighted and photographed a sea turtle in the Maldives? Email seaturtleid@oliveridleyproject.org for more info on how to contribute to the Turtle ID Project. We need the date, location and clear photos of both sides of the turtle’s face.